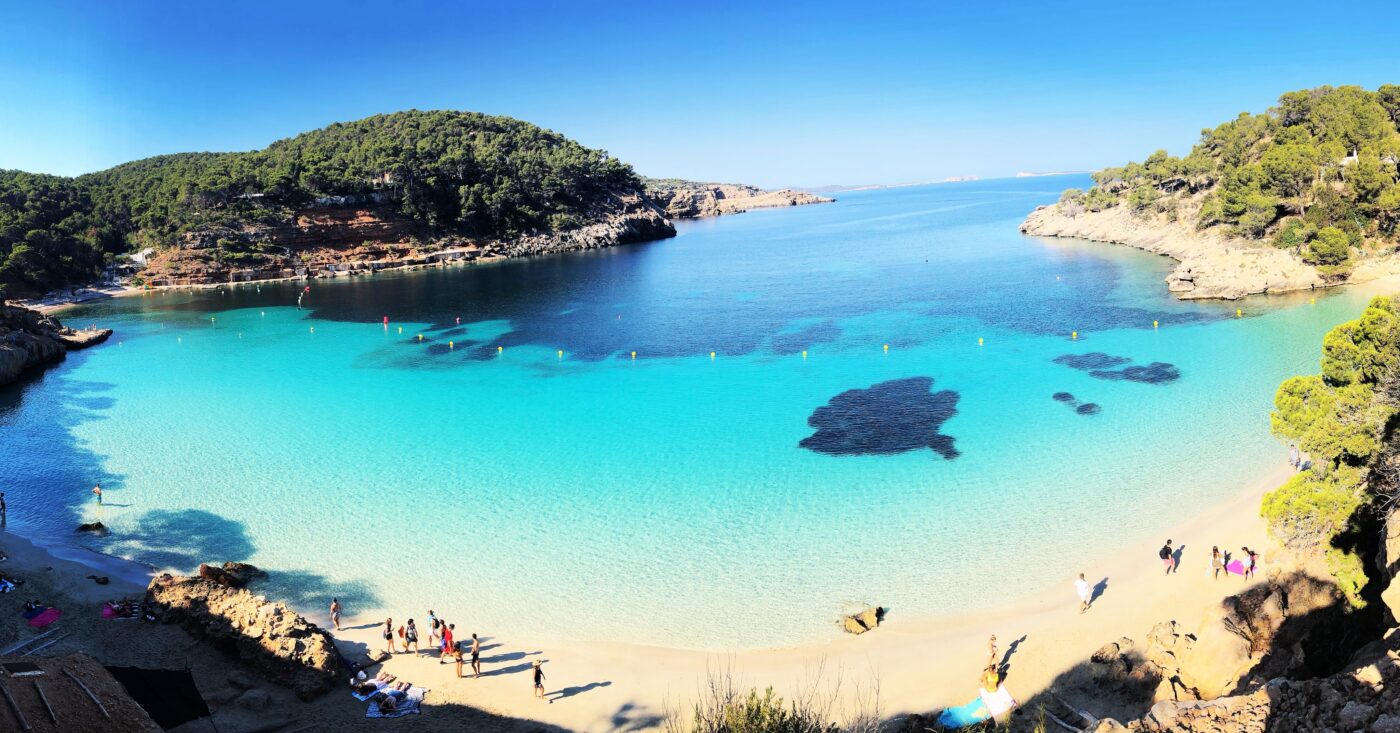 Whether you’re into snorkelling in isolated coves, bathing in waters that redefine the word turquoise, or hanging out with celebrities in famous beach bars, there’s something here for everyone

Cala Saladeta is, without a doubt, one of Ibiza’s paradisiacal spots, which makes it a very popular place in July and August. The beach, with fine sand and turquoise water, has a large area at the end where you can lie in the sun, preceded by several dry dock huts, all made of stone. It is undoubtedly a magical enclave where, however, there are no services of any kind. A path between the rocks leads to Cala Salada, where there is a restaurant. It is ideal to take a backpack well stocked with provisions and enjoy its charm, especially in the months of July and September, when the heat invites you to go swimming but the crowds are much smaller. 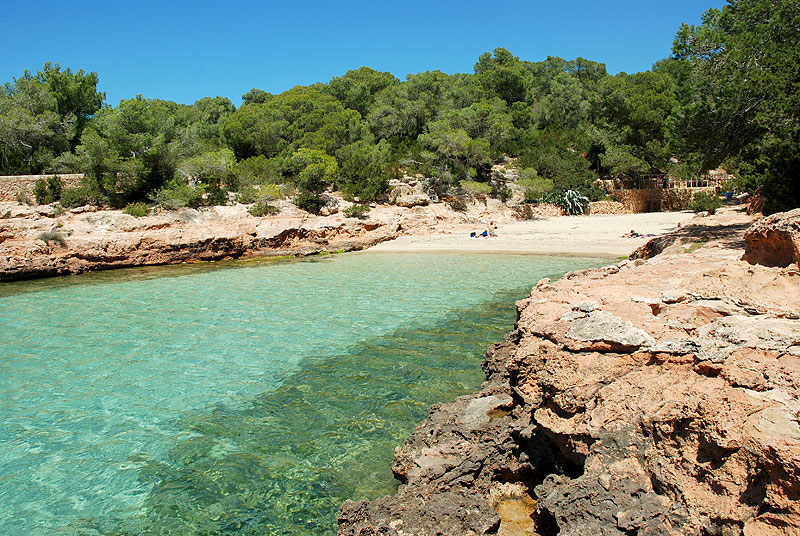 The waters of Cala Gracioneta are transparent and calm as if it were a swimming pool, and its clear sand is sheltered by a rocky inlet surrounded by pine trees. These are some of the reasons why we consider Cala Gracioneta to be one of the best coves in Ibiza.
Due to its small size means that with just a few people visiting it, it can get quite crowded.
We recommend booking a table for lunch at Cala Gracioneta Chiringuito

Cala Xarraca is a cove located in the north of the island of Ibiza, and is well known by diving lovers, as it usually has the clearest waters in Ibiza.
Cala Xarraca is divided into two sections. The first is the one that leads to the beach, right in front of the restaurant, and it is the longest, with a length of about 100 metres. Fifteen metres wide and sheltered from the wind by a small cliff, we will have the sensation of being well protected.
Just in front of this cove we find a small islet, which can be easily reached by swimming. Cala Xarraca has a great depth just a few metres from the water, and the seabed is of great interest to divers. The surroundings of the islet of Cala Xarraca are also places where you can discover a large amount of marine fauna. In addition, there are many waves breaking in this area, which means that there is not a big swell on the beach. 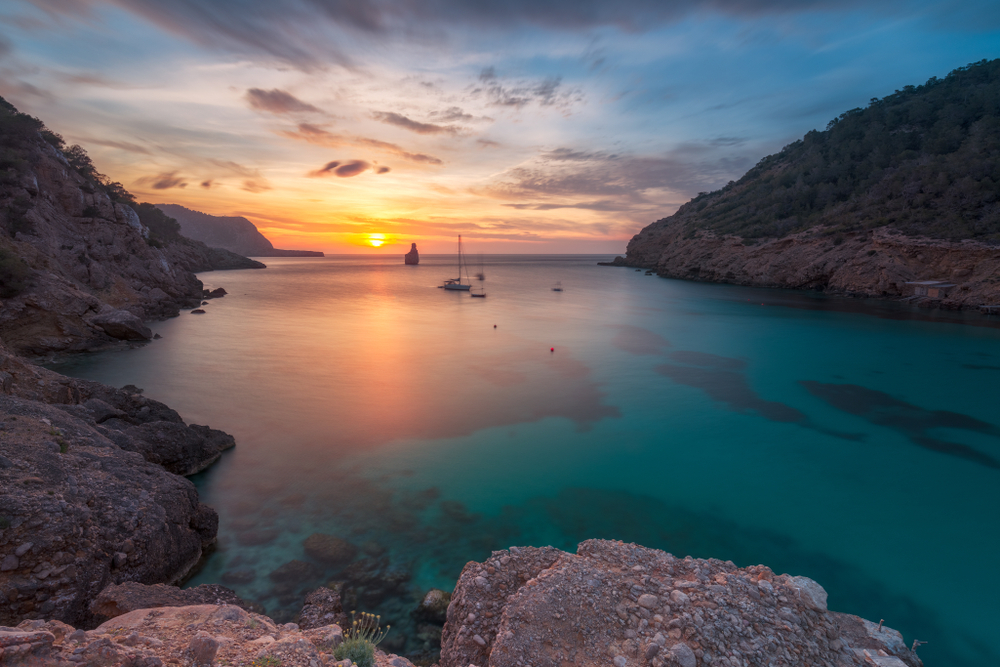 Benirràs is one of the mythical coves in the north, where on summer evenings the sun sets to the rhythm of the drums, beaten by numerous drummers attracted by this ritual. The magical touch on the horizon is provided by Es Cap Bernat, a narrow, pointed islet, 27 metres high, located in the centre of the bay.
On any given day, the beach is frequented by all kinds of people, although it maintains its hippie reminiscences. It has several restaurants and a beach bar, as well as sun loungers, parasols and pedal boats. The outside is sandy and the inside is also sandy, although there are some gravel stretches. At both corners of the bay there are a few beach huts. Undoubtedly one of the most picturesque corners of Ibiza to enjoy with the family, as a couple or with friends. Ses Salines was declared a Natural Park in 2001 and is one of the essential visits to make in Ibiza. The territory of the reserve covers almost 3,000 hectares of land and 13,000 hectares of sea, and extends across the south of Ibiza and the north of Formentera, also occupying the arm of the sea that separates them, which is home to a large part of the Posidonia oceanica meadows that surround the islands and which are part of the declaration of Ibiza as a World Heritage Site in 1999. Its action is the cause of the island’s rich marine biodiversity, as well as the purity of its waters and even the landscape of the Pitiusa coast.
In ancient times, salt was a vital element, as it allowed food to be preserved. The “white gold” was a factor of wealth wherever it was produced, to the point of being used as a currency at different times. In Ibiza, exploitation of the salt ponds began in Phoenician times, around 600 BC, and for centuries it was the island’s main source of wealth, as the Carthaginians, Romans, Muslims and Christians continued to produce salt uninterruptedly.
Intense exploitation of the ponds began in the times of Muslim Ibiza, in the 12th and 13th centuries. The great technical improvements to the salt ponds, however, took place after the Catalan reconquest in the 13th century. In earlier times, salt was obtained naturally, collected from the margins of the two large ponds that existed at that time. The water entered through a channel with the tides and then evaporated, accumulating the precious mineral. The Christians installed sluice gates, created new ponds and improved the shipping infrastructure.